Yesterday I got a message from an old friend. Her Facebook page says she’s a young married woman, but she’s an old friend to me because I’ve corresponded with her for a long time. As a middle-schooler, she read my stories on www.BZPower.com, which is where I posted fan fiction about the Bionicle universe. 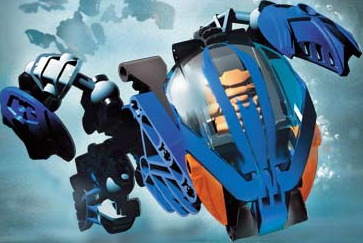 Back in the day, I helped my 5-year-old assemble a Gahlok. This was a gift she’d selected at a pricey toy store with her unsuspecting grandmother. If you’re not familiar with Bionicle, imagine a six-inch plastic robot cockroach that curls up to fit back into its packaging, an oval plastic pod. Like every LEGO set, it came with a booklet of isometric assembly drawings. The blue halfmoon torso trusses and gray gears were held with plus-shaped black rods, and the ball-jointed legs and wedge feet made the little gizmo very poseable. It was powered by two rubber bands. When you squeezed just so, the upper half would lunge forward and launch a little rubber thing from its translucent plastic head-plate.

Then my daughter noticed a web address on the creature’s container. Pulling her onto my lap, I typed the address into the browser bar. The Danish toymaker had harnessed the newly popular Internet to lavish freebies on the fans. The canon appeared alongside the sets one chunk at a time, through online flash animations, interactive games, and digital comic books. (LEGO would mail you free paper copies, too.) The creative, well-designed toys, rich virtual universe, and numerous collectibles appealed to kids and grownups alike. AFOLs (Adult Fans of Lego) started fan websites with news articles and discussion forums moderated for young eyes. Members posted photos of original LEGO creations, artwork, and fiction. Then LEGO gave the fans the ultimate gift: a storyline writer joined the preeminent fan site to answer questions and scatter enticing spoilers.

The Mata Nui Online Game taught my preschooler to read, and BZPower taught me to write. With the feedback and encouragement of the other members, a few “interviews” with the LEGO heroes grew into novellas with original characters and multiple universes, ultimately inspiring Drawn to Disaster.

Thanks, LEGO, and BZPower members, for those days. And thanks, Elaina, for asking about the old stories! (You’ve given me the ultimate gift: reading my book twice.) I’ve posted my fanfiction here on this site:

P.S. Next month my daughter graduates from high school.

The annual Texas Book Festival was started by Laura Bush, who, like Zarena, is a librarian by trade. Along with the official book offerings, vendors and publishers set up tents along the streets by the Capitol. This year, the weather and the people were warm (as they usually are in Texas), and as Zarena, I received a friendly welcome by the locals. Countless little kids, and even several adults, wanted to take a picture with me. I handed out a hundred bookmarks with free ebook coupons. Time will tell whether the bread crumbs I cast upon the waters will return to me, but in any case, it was a lot of fun.

You can see more pictures of me as Zarena here, or on my Facebook page (sidebar).

Several people had raved to me about a new fantasy series, A Song of Ice and Fire, and I’d been looking for a good read. I opened the hefty paperback copy of A Game of Thrones and stared at a complex map with a host of names. Would the effort be worthwhile? Within a few chapters my doubts vanished. The hunk of paper pulp in my hands was the work of a brilliant craftsman.

Fully human characters, medieval details alternately delicious and ghastly, an intricately interwoven plot–this series has it all (through the second book, at least, and today I dashed out of my cave for the third). George R. R. Martin doesn’t spare noble or appealing characters, making every cliffhanger all the more intense. But once I resigned myself to the prospect of loss, I felt safe slipping into his richly crafted and tightly consistent world.

And to my delight, I found the doppelganger of one of my own characters: the raven belonging to Jeor Mormont, the grizzled Lord Commander of the Night’s Watch. A typical exchange occurs in A Clash of Kings, when the black bird hops on the Lord Commander’s shoulder and repeats “Old, old, old!” until his master swats him away. Does this creature remind you of anyone in Drawn to Disaster?

This happy coincidence makes me feel really smart, even while swimming in humility at the greatness of GRRM’s writing. Most importantly, I feel blessed to live in a world where an ingot of literary gold can be got for $7.99 plus tax.

Thanks for all your support this year. As you may know, I published the paperback of DRAWN TO DISASTER in July, and the ebook in October. The video trailer followed in December. You’ve bought 10 paperbacks and 99 ebooks, given me two reviews on Amazon (5 stars) and six on Smashwords (4.83 stars), and watched the trailer 90 times. (Okay, a few of those views were me, and I did give out a ton of Smashwords coupons, but still…) Check out my blog stats below.

You guys are great! Happy new year, and may your seas be calm.

The WordPress.com stats helper monkeys prepared a 2012 annual report for this blog.

For those of you who live under a rock like I do, there’s a site called Pinterest.com where you can ‘pin’ web pictures on a virtual bulletin board for people to peruse and discuss. I’ve set one up with some visual inspirations for the places, objects, concepts, and characters of Drawn to Disaster. Presenting…

I invite you to stop by and take a look. If you have comments or suggestions for things to add, please contact me–here, there, or on Facebook.

For your electronic enjoyment, the ebook edition of Drawn to Disaster is now available for $3.99 on Smashwords: https://www.smashwords.com/books/view/243393. Once you buy it, you can download it forever in any of the available formats (EPUB, HTML, Kindle, PDF, RTF, etc.).

I’m amazed and grateful to the founder of Smashwords (an author himself) for making the process relatively easy–all I had to do was clean up the formatting in MS Word, and then upload the DOC file and front cover JPG.  The Meatgrinder processed it into the different electronic formats. Except for the extra page break in the table of contents (which I’m still trying to remove), it was seamless.

Createspace, the print-on-demand service of Amazon that’s publishing the paperback, is terrific as well. I just formatted the manuscript and wraparound cover image and uploaded them as PDFs. I was able to set the price so it’s reasonable for the public and cheap for me, and the royalty calculation still comes out positive if it sells through other bookstores. (Coincidentally, it’s a power of two–or is it a coincidence? I wanted to set the eBook price at an even four bucks, but Apple rounds up to the next .99. I’ll live with the one-cent imperfection.)

Both editions were completely free to set up, and I can update my files at any time. I really recommend them for any aspiring author, just because it’s wonderful to see your work in print, and to share it with others it might entertain. Thank God we live in the electronic age!

In case you’re wondering: Yes, I do want you to tell me if you find an error!

I’ve added a missing ‘you’ on page 303, and removed a duplicate ‘my people’ on page 78. Thanks to the control and flexibility CreateSpace gives authors, these are fixed for future orders. (If I sound like an ad for CreateSpace, it’s because it’s awesome.)

Don’t blame my editor; I changed some things after she reviewed it. Thanks to Stassney, an attentive reader, for catching the second one.

Hey, maybe someday the first editions with errors will be worth something on eBay.

But seriously, I wrote D2D is just to release it from my brain and let other people read it. I’m excited at the reaction so far. Now I need to get some formal recognition (reviews), so I can get libraries to offer it. Any of y’all know a literary reviewer?

May your seas be calm.